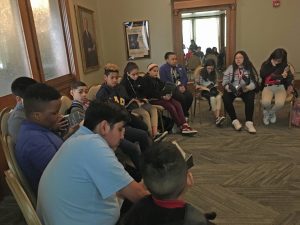 On May 21st, Peace Learning Center hosted 150 students in downtown Indianapolis at the Athenaeum for the 4th annual youth symposium. This year’s theme was Amplify: Harnessing the Power of Youth Voice. This event, presented by PLC in collaboration with the Indiana Division of Mental Health and Addiction, brought together students who are leaders in their schools to develop the skills to use their own voices as an agent for change. The focus of the event was youth activism and youth harnessing the power of their own voices. The participants learned about youth changemakers and the difference one kid can make in their own community.

Upon arrival, the students ate breakfast and watched the short film Little Warriors about a group of Indianapolis kids who made a difference on environmental issues through action and advocacy. The film tells the story of how these students got a climate change resolution passed in the Indianapolis City-County Council. After being inspired by the Little Warriors film, the youth broke into small groups for more in-depth activities. In their small groups, the students read the book Secret of the Troublemakers by PLC’s own Kristina Hulvershorn. Secret of the Troublemakers is a call to action for disruption of the system in the pursuit of changing the world. Next, they learned about a few powerful youth activists like ‘Little Miss Flint’ Mari Copeny, who has done amazing work in her community surrounding clean water and the Flint water crisis. After being inspired to make ‘good trouble’, the students identified causes they were passionate about and brainstormed ways they could make changes to better their cause. They each created their own youth activist profile. One 11-year-old student said, “I chose immigration because my family emigrated from Mexico, but they weren’t sure if they were ready because they were afraid to get caught and separated from their family.” Another student detailed his cause: “I want to change gun violence by speaking up and no matter what 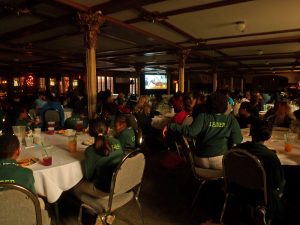 happens, I’m not going to stop. I care about gun violence because some of my family is scared to go somewhere and get killed.”  These young changemakers then developed their own campaign including slogans, protest signs, bumper stickers and megaphones to help them raise their voices and build a movement.

The day wrapped up with lunch provided by the Rathskeller and a meet & greet with the Troublemakers author Kristina Hulvershorn with the opportunity to get their books signed. Finally, the students also got to enjoy snow cones provided by Royal Sno and the Natural Born Leaders Academy after a short discussion with PLC’s Melita Carter about youth entrepreneurship.  By the time the kids left to return to their schools, they were inspired and felt motivated and empowered that they could have a positive impact in their communities.