Celebrating the Service of James Taylor

James Taylor, better known to friends and family as JT, has been a staple of Peace Learning Center from the very beginning. In the early days, when PLC was teeming with AmeriCorps members he numbered among those serving in the Peace Education crew that helped to host every 4th Grade Indianapolis Public School student.

Believe it or not, it wasn’t as easy as you would have guessed to get him on the team. Tim Nation relates this story: “When JT first started, he told us his friend Omar had urged him to apply for months and he ignored him because he thought he was saying the Indianapolis Peace Center, a local anti-war advocacy group. Once he learned we were located inside Eagle Creek Park and working with kids he knew right away this was the place for him. It was somewhat of a homecoming since JT had worked at the tree farm on the north side of the park when he was younger.” 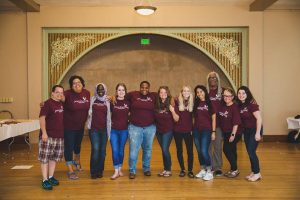 If you know JT, you know that his friendly smile, comforting hugs, and ability to strike up a conversation with anyone make him easily loved by all who meet him. It wasn’t long before it was a daily occurrence for a child to stick their peace sign into the air proclaiming, ‘Hey, Peace Man!” whenever they saw him in public.

JT found himself drawn to programming that served the sometimes most vulnerable and misunderstood of youth, those in the juvenile justice system. He helped establish an intervention program in the Marion County Juvenile Justice System bringing arts, service dogs, peace education and future visioning to incarcerated youth. His tireless effort and dedication to the program led to full-time work at the Indiana Girl’s School and then the Indiana Boy’s School in Pendleton where he and his team engaged with every youth and adult in the facility. This program was highly successful, reducing monthly discipline reports from 160 to under 30 over a three-year program implementation period.

Like JT, Naeemah Jackson has been present since the “birth” of PLC. In her own words, the time she’s worked with JT has been deep and intense, “from the formidable and challenging work in the Boy’s and Girl’s maximum security prisons; to working with angry youth relegated to so-called alternative school – most who had every right to be angry at what life was giving them; to working with youth striving for a second chance with Rupert’s Kids; and also with youth and families in much less painful situations. JT always modeled what is needed to pull them out of the “school-to-prison pipeline”; and present to them the ways and means for a much brighter future and to give them the information and support they sorely needed.” 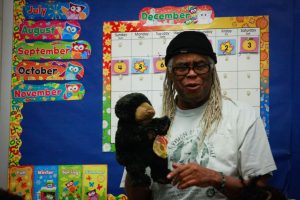 It’s been JT’s innovation over the years that has led to some of PLC’s most successful programs. He led PLC to adopt the Help Increase the Peace Program (HIPP) from the American Friends Service Committee and most recently, advocated for Restorative Practices to become a core part of our programming.

“For months JT would leave notes and articles in my email inbox and on my desk. He was trying to tell me that it was time for us to make Restorative Practices part of our work at PLC. One day I told him, ‘You know what, it’s never going to be the right time.’ So, with my five-month-old, preschooler, and husband in tow, we headed up to Chicago for a four-day training. JT and I knew we were among our people as soon as we got there. My fear of having an infant at a fairly formal training was quickly laid to rest when I realized how many open arms there were to help. JT must have realized it too because after returning from the bathrooms I looked at JT (who was supposed to be holding the baby) – his arms were empty. Luckily we both made eye contact with the woman who was holding her at the same time and laughed. He forgot that we weren’t all family…but that’s kind of the thing about JT. It’s not that he forgot that we weren’t, it’s that he remembered we all are,” Kristina Hulvershorn.

Even those at PLC who have been here for less than a month attest to JT’s easygoing attitude that made being a part of the team so comfortable. Nina Goradia says that JT instantly made her feel included, even calling her sister in such a way that brought her into the PLC family immediately. 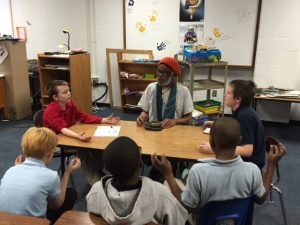 In the last few years, JT joined his fellow Youth Development Facilitator’s back in classrooms, first serving in alternative schools such as Coleman and then moving to elementary schools where his joy became contagious to preschoolers. This story from Clare Wildhack-Nolan is just a short example of the impact he had on younger children:

“Watching JT interact with grade school children has been a huge joy! He always knows how to pull in the most challenging kiddo by starting with their interests and building relationships. He isn’t afraid to express love and dignity to anyone. He promoted the ‘I love myself’ chant, including the phrase ‘Si Se Puede’ and teaching it to all kids. Today in one of my 1st Grade classrooms I was thinking of him because the kids who were of many races were all chanting ‘si se puede’ as they took their seats. For some of them, ‘yes, we can’ will be the first Spanish phrase they learn due to JT. He was a great mentor for me!”

His dedication to the cause went beyond simply fulfilling programmatic duties. JT was always advancing the mission, fundraising on our behalf, and a tried and true representative for the organization at each event that was held. From right here in Indianapolis to the streets of Jamaica (where JT did work on behalf of PLC), he has been the greatest cheerleader of our work.

Jay Horan described one of her favorite memories of him when the team took on the task of creating a “hype” video when they were participating in Brackets for Good, “In the video, we all showed off our amazing, or not so amazing, basketball skills. JT showed up in full old-school basketball gear and went all in for the video. This proved to be the theme throughout JT’s time at Peace Learning Center, ‘all-in.'”

Students who have visited PLC in the past few years will remember JT as the “peace guy” that led them through meditation and mindfulness practices. Time and again, these activities continue to be the most popular among students and teachers alike. His skill at calming a room simply with his presence and voice is something we all will be working hard to replicate in the future. Frankie Veesee picked up on this when she was volunteering for PLC field trips, “His connection with students was genuine and passionate. I loved seeing students remember the meditation techniques he taught them.” 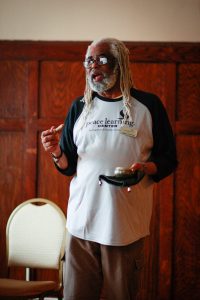 With deep gratitude we celebrate and thank James Taylor for the many years he has dedicated to this organization. Ms. Jackson said it best when she said, “Indeed, our profession will officially ‘lose’ a master facilitator, but knowing JT as I do, he will never cease to work for the betterment of youth as well as the betterment of our community at large.”

Here’s to your next journey in changing the world, JT!